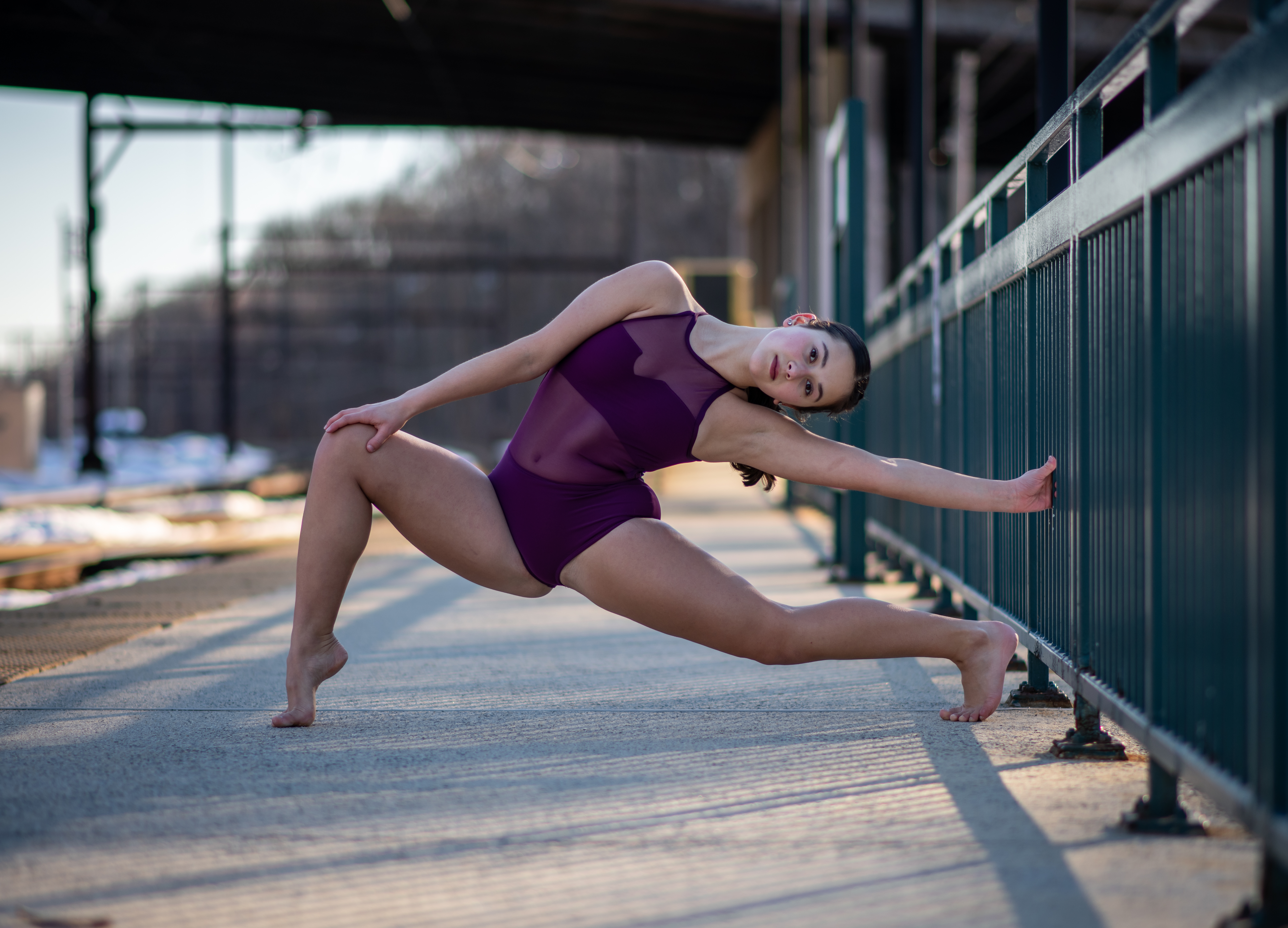 Picture This: After Cross-Country Move, Teen Dancer is Living Her Lifelong Dream — on Both Sides of the Camera

When she was just starting elementary school in her suburban Philadelphia hometown, Sophia Capecci had a clear vision of what her future would look like, and she wasn’t shy about sharing it with her family and friends.

“Since I was 8 years old, I’ve been saying, ‘I’m going to dance in California when I’m older,’” Sophia remembers. “People would ask me what I wanted to do, and I would say that, and they would laugh, like, ‘Oh, what a cute little childhood dream!’ — you know, like when little kids say they’re going to be an astronaut or a rock star. But I was like, ‘No, I’m not kidding!’ And that dream never changed. I have had the same dream since I was literally 8 years old, and I was able to keep the confidence and fearlessness to actually do it.”

In the decade since she first voiced her grand plan to move across the country and pursue a professional dance career, the people in Sophia’s life have learned their lesson. When this young lady has a goal, she is 100% all in, willing to do whatever it takes to chase after it. Doubt her at your own risk! 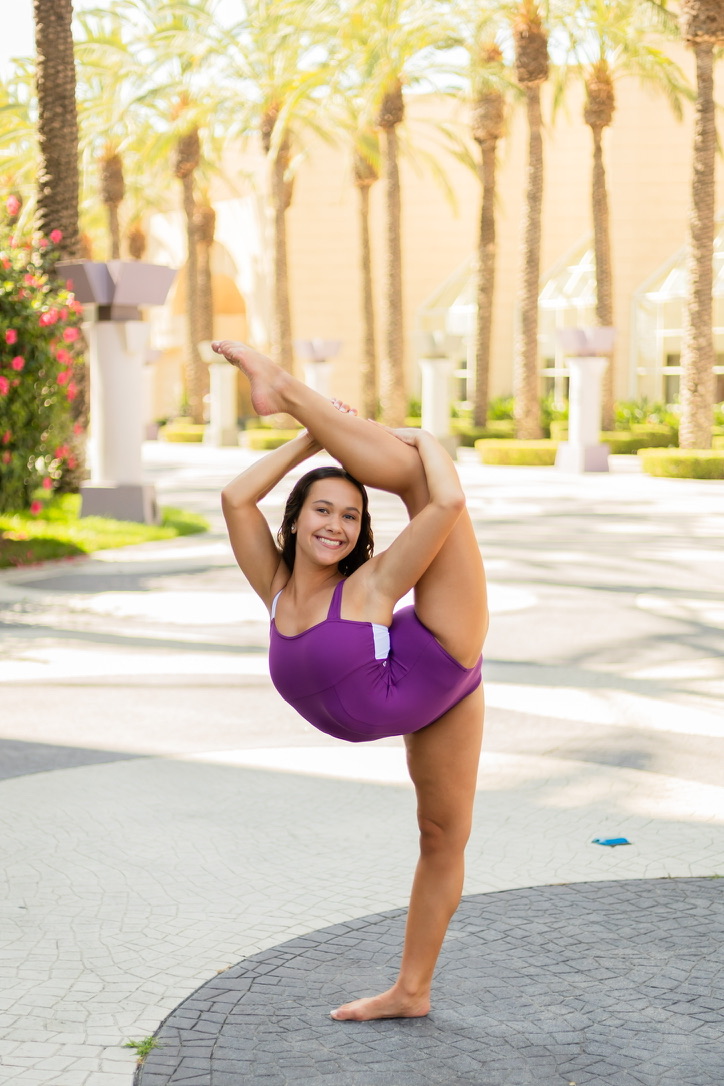 At 18 years old, Sophia (shown above in a photo by @ joslynrenee_photography) is seeing years of unrelenting dedication pay off. She’s living her dream, having been accepted into the prestigious Launch program at The Space dance academy in Brea, Calif., near Los Angeles.

Sophia recently bid farewell to her big, supportive Italian family on the East Coast and has settled into her very own Orange County apartment. She has an exciting new routine filled with intense dance classes, media days, video shoots, modeling gigs, and even trips to Las Vegas to perform live with her Launch family.

“It’s hard to believe it’s only Week 7, because it feels like I’ve been here forever,” says Sophia, a graduate of Neshaminy High School in Langhorne, PA, who was heavily involved in student government and arts programs, despite her busy dance and modeling schedule. “We’ve done so much already. It’s crazy. There have been so many cool opportunities [for Launch students] this year that they didn’t do last year, so it’s exceeded my expectations 1,000 percent.”

Free time is in short supply for Sophia, who is preparing to start online classes with Penn State University’s World Campus, where she will major in digital journalism and media. She also hopes to sign with a creative agency that can hook her up with various professional performance opportunities. But she also plans to continue the “side hustle” she picked up during the COVID-19 pandemic back in 2020: dance photography.

That’s right: Not only is Sophia a serious dancer and committed college student, but she is a self-taught photographer who has been shooting photos to earn extra money for more than two years.

Below are a few examples of Sophia’s work, featuring some of her friends from back home in Philly (Photo Credit: @ sophiagrace_photos). 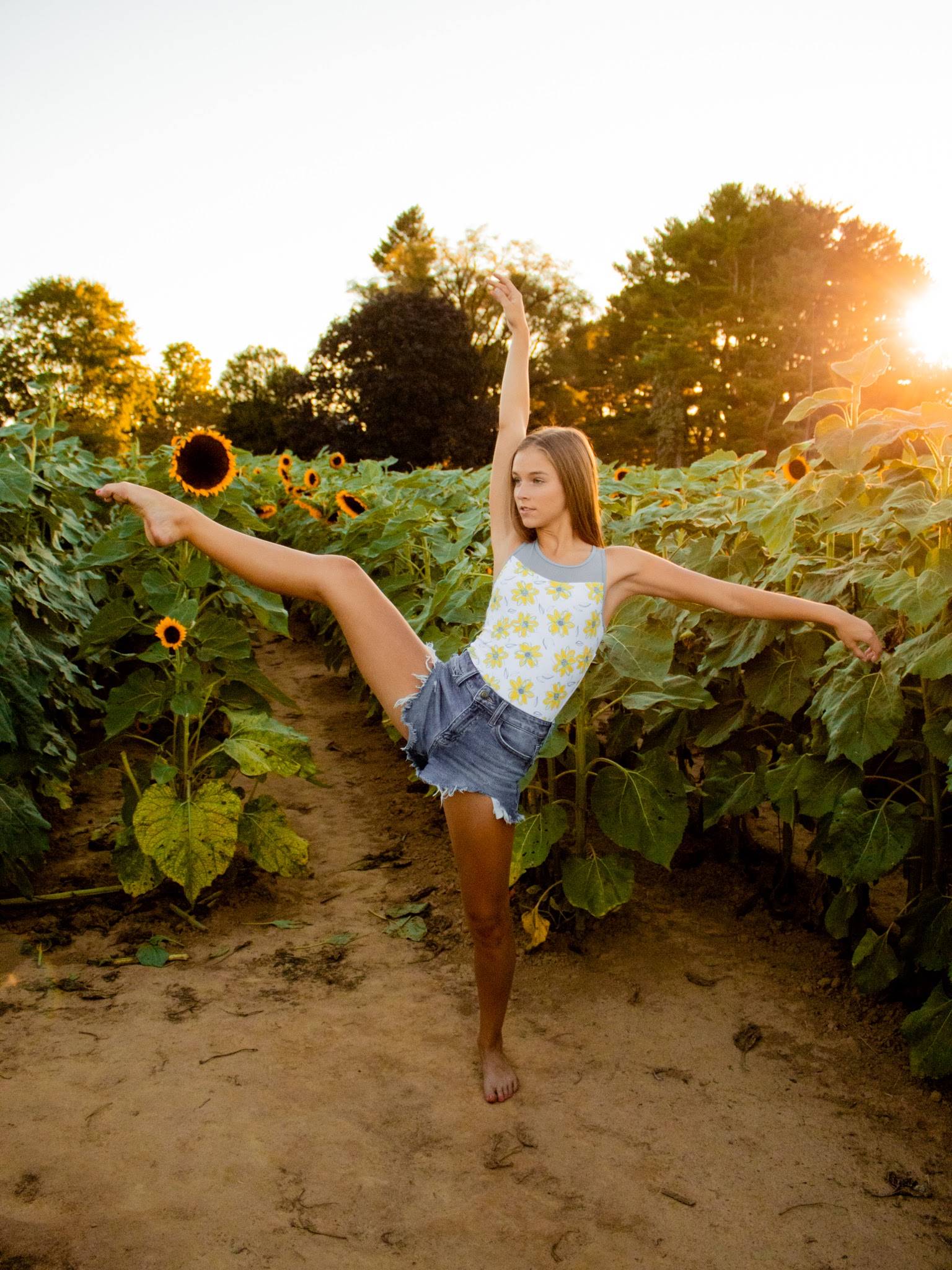 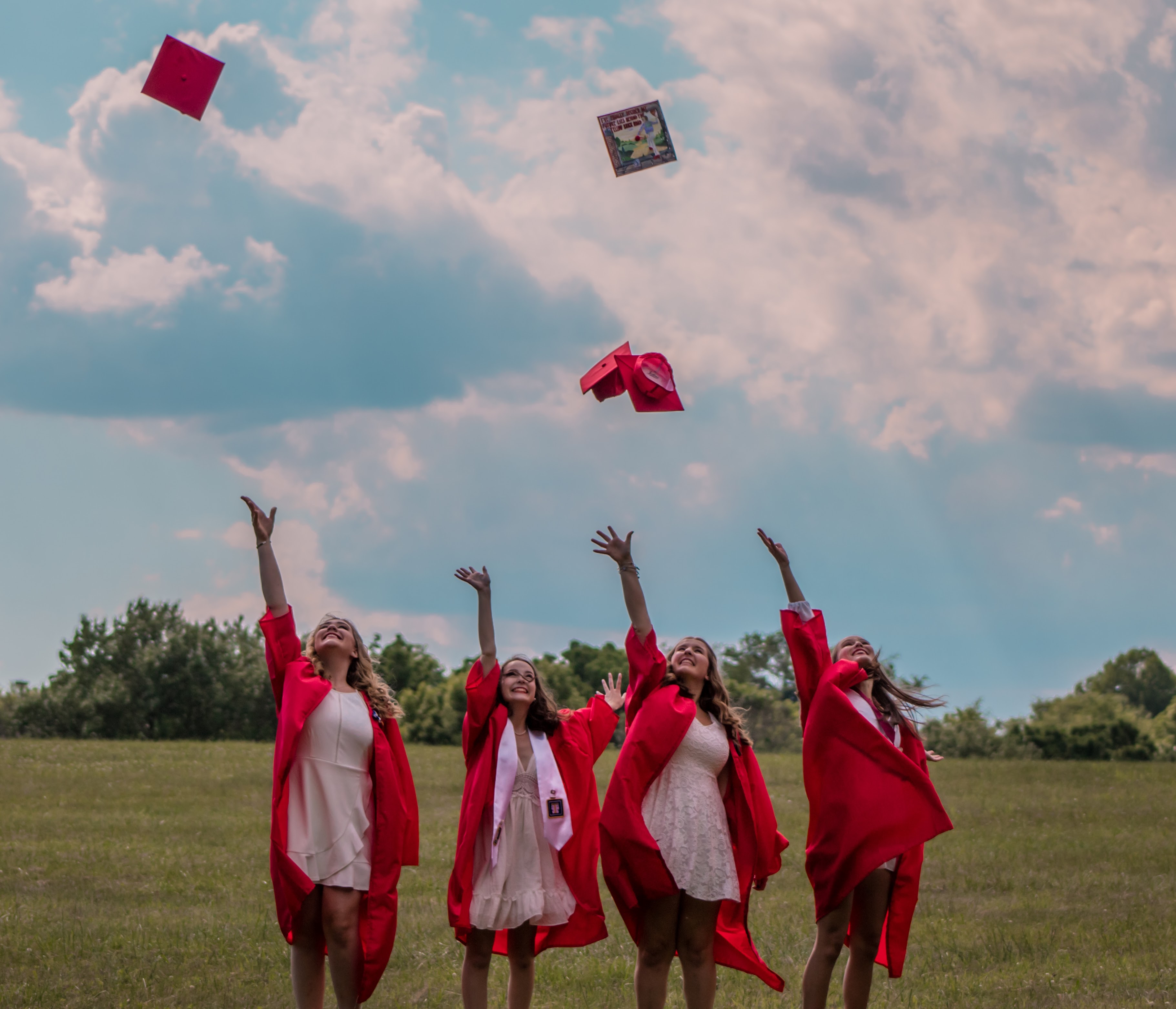 “I’m not looking to become a photographer with my life, but I’m leaving it open because it’s definitely a great side job,” Sophia says. “Like when I moved here, my dad suggested I go to the mall and see if they’re hiring, but I can’t ever imagine myself working in a food court.

“People in the arts are so passionate, and they have to do their thing. For my own sanity, I feel like I have to do what makes me happy, and photography is a passion of mine. I love it so much, and when I do a shoot, I am genuinely excited to see the photos. When I have new photos, it feels like Christmas, you know? And when the image turns out how you hoped and envisioned it would, it’s such a rewarding feeling.”

Sophia already had experience in front of the camera, having modeled for several dancewear brands, including Costume Gallery and Motionwear. Her foray into photography happened during COVID quarantine, when she was bored and shopping around for cameras on eBay.

She says her dad told her, “If you’re actually going to use the camera, I will buy you a new one.” And true to form, Sophia made that promise, then dove headfirst into keeping it.

“I got the camera, and then I spent hours, literally reading that manual front-to-back multiple times,” Sophia says. “I was watching YouTube videos, and I got in contact with my photography mentor [@ Joslyn Renee Photography], and I would FaceTime her, and she would help me learn how to work with the camera and all the different settings.” 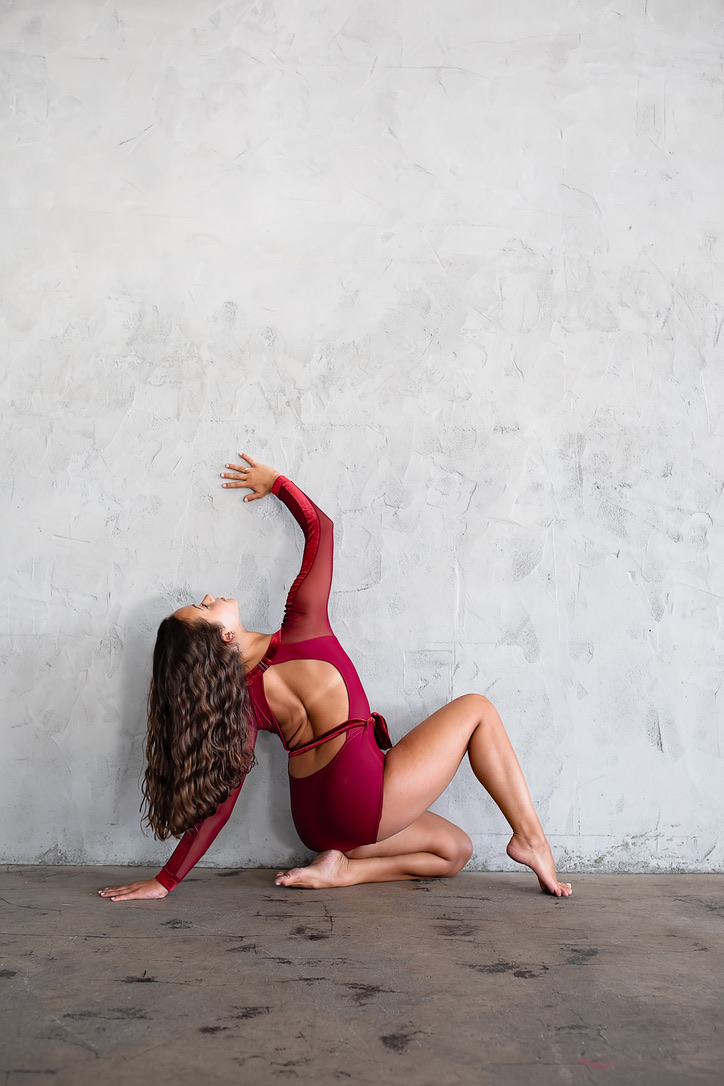 Knowing what it feels like to feel and look beautiful in professional photos — she’s especially fond of the above image, shot by @collettemruk — Sophia says her passion for photography comes, in part, from a desire to pay it forward.

“My parents are always huge on giving back so I think that was kind of like really instilled in me at a young age,” she says. “With photography, I want to give as many people as I can new opportunities and experiences. I think it’s about sharing the wealth and creating opportunities. I love to be able to see, especially in group shoots, when people’s confidence grows as they get comfortable in front of a camera.”

Sophia’s advice for young shutterbugs who aspire to turn their passion into a profession?

“Be patient with yourself and ask photographers that you love for advice,” she says. “It takes a while to figure out editing and to find your style. Your style is something that is constantly growing and evolving, not something that just happens instantly. Finding a photographer that you have worked with or have followed for a while is a great way to learn!”

In all the years she’s been working her tail off to realize her California dance dreams, Sophia admits she’s had plenty of setbacks and moments of self-doubt. She got through all of those tough times by doubling down with fierce determination.

For example: In her home studio, Sophia was part of a highly successful competition team, and year after year, she watched all her friends claim first-place and national-title hardware for their solo performances while her solos claimed no higher than second.

“I had been competing solo since I was in fifth grade, and I never won first place until my junior year, which was my last year competing,” she says. “I literally would get so upset, thinking I had to be the weak link on the team if I’m not winning first with my solo, and then, when [COVID] quarantine happened and the rest of the world was doing who knows what, I was literally living in my basement, taking like five dance classes a day. I trained so hard during quarantine that I literally became a totally different dancer.”

Shortly after pandemic restrictions were lifted, Sophia showed off her new skills on the competition stage — and she finally experienced her big breakthrough.

“The second competition back, I got first place and title, which was the first time I had ever won,” she recalls. “When I got the critiques back from the judges, one of the judges was like, ‘I can tell someone didn’t take a break during quarantine,’ and it literally made me cry because I had worked so hard during those months. I would lock myself in the basement and just dance all day, every day. I felt like it all finally paid off.” 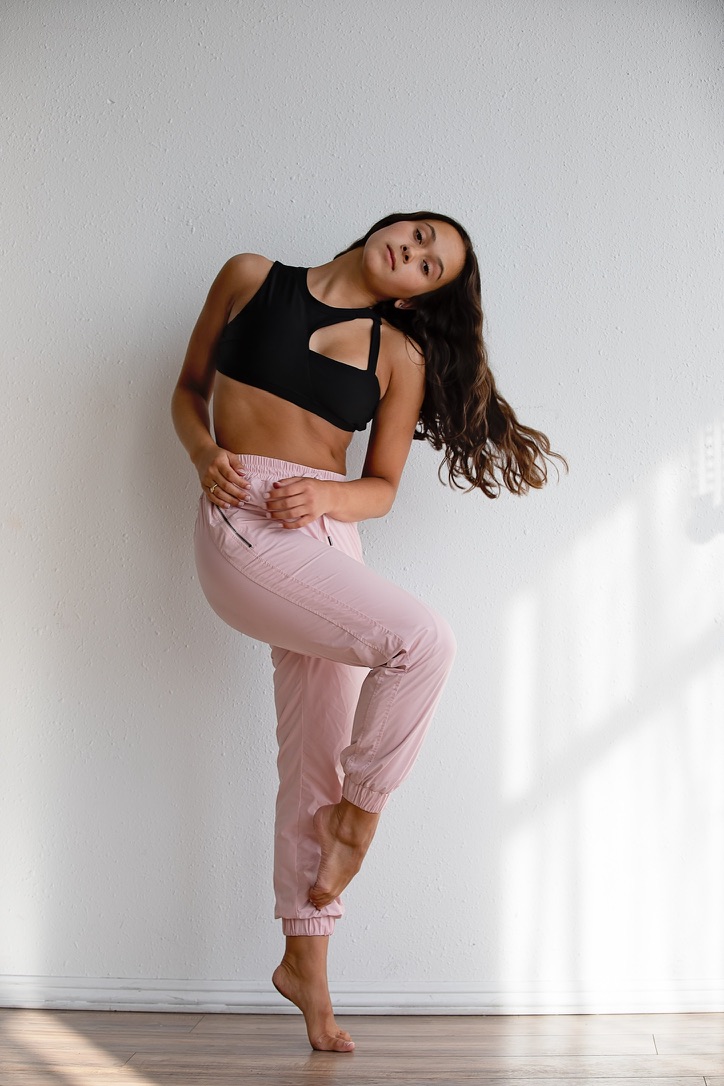 That exceptional work ethic came in handy when, just a few months before she was set to audition for the Launch program, Sophia suffered a broken foot. She was stuck in a walking boot for six weeks and had to undergo physical therapy from January through April of 2022.

This injury was threatening her lifelong dream of dancing in California, and Sophia struggled — hard — to be patient and let healing take its course. She did whatever she could to keep up her stamina and spirits, from learning choreography for a musical theater production while still in the boot, to practicing in her basement wearing hard-soled slippers to prevent her from pointing the injured foot.

“It was a mess, to be honest, but I was like, ‘There is no way that I’m giving up this opportunity!’” she says.

With the solid foundation of skills she built during her marathon pandemic dance sessions, and the super-strong will that is her trademark, Sophia ended up painting a picture-perfect ending to that story.

She nailed her Launch audition and made the cross-country move she dreamed about back in elementary school. She’s part of one of the top dance programs in the country, learning from some of the best performers in the business, and shining bright — on both sides of the camera. At this point, anyone who doubts that Sophia will reach her professional dance goals…hasn’t been paying attention!

“I would definitely say, and this is cheesy, but literally to never give up,” she says. “Even though I said my dream never changed, there were so many times when I felt like I wasn’t going to reach it, like so many moments in my career when I was like, ‘I’m not going to make it there. I’m not good enough.’ But I never gave up and I kept going.

“I think I just didn’t allow myself to give up, because I wanted it so bad that it consumed every waking second of my life. I spent every waking second thinking about my audition, and any time I was in class, I would be pushing hard, because of this audition. I just have a big drive, and I think that has really helped me through everything.”

Motionwear would like to thank the multi-talented Sophia Capecci for taking the time to share her story with us! Follow Sophia on Instagram at @sophiagracecapecci and @sophiagrace_photos, and stay tuned to our blog for more inspiring stories from the world of dance!